To use your existing phone in New Caledonia you will need:

2. The smartphone, tablet or USB key must have the following bands (frequencies)

If you want to make sure your phone will work in New Caledonia (providing it is unlocked) visit https://willmyphonework.net/

The phone or tablet or WiFi hotspot has to be unlocked or you won't be able to use it in New Caledonia.

Some American or Japanese mobile phones won't work in New Caledoni. Only ulocked phones will be able to use a New Caledonia SIM card so if you bought your phone from a telecom or mobile service you will probably have a phone locked to their service and you can forget about using it in New Caledonia except on roaming. Some services, like Vodaphone, will unlock your phone or modem for a fee but you need to do it while still in the country where the phone is registered. They can't change the frequencies, however.

You can buy a phone in Noumea for a reasonable price and get a "Liberte" mobile pay in advance sim card at the same time but you'll do better to buy an unlocked Android smart phone with the correct frequencies from eBay or one of the big online discount stores before you leave.

You can avoid all the hassles with getting the right phone and access to the Internet by renting a portable WiFi hotspot from NCPocketWiFi. Connect up to 5 computers, phones or tablets to the WiFi hotspot and you have unlimited Internet access almost anywhre in New Caledonia. You can reserve yours on the NCPocketWiFi website or get it in Noumea when you arrive (they will deliver it to the marina where you clear in)..

The 3G and4G network covers all of New Caledonia, the Loyalty Islands and Isle des Pins. However, there are some areas where the signal fades or does not work at all. You can pretty much depend on coverage where there is a sizable village or town, and there are many remote areas that have line-of-sight to an antenna.

Open a new tab for the New Caledonia 3G and 4G coverage map.

The Cruising Guide to New Caledonia gives you the actual mobile phone reception in every anchorage and along the coastline so you won't have to guess about coverage.

When cruising close along the east coast of Grande Terre the signal sometimes appears and vanishes as you pass villages and towns. However we have had reasonable reception in anchorages as much as 27 nautical miles from the nearest antenna and the system is expanding rapidly.

Most countries - and mobile phone providers - have a roaming agreement that works in New Caledonia - You REALLY do not want to use data on your mobile while roaming here.

Roaming data costs in New Caledonia are shocking - up to $15,000 for 1 GB of upload/download traffic.

The Carte Liberte "pay in advance" service is the best deal for using your mobile phone in New Caledonia. There are numerous providers in Noumea that can quickly and easily fit your unlocked 900/2100 3G phone with a New Caledonia SIM card. The pack costs about 6000 cfp for the sim card, set up and 3000 cfp in call credits.

Stop your computer uploading and downloading in the background

Windows 10 and several programs constantly upload and download data without your knowing about it or letting you stop this abuse of your expensive mobile data limits.

Here's how to stop your Windows 10 computer from downloading and uploading in the background while you are cruising.

Mac computers also do Gigabytes of downloads automatically. In addition to slowing up your browsing the end result will often require updating lots of other apps. Here's how to stop your Mac from downloading and uploading in the background while you are cruising. 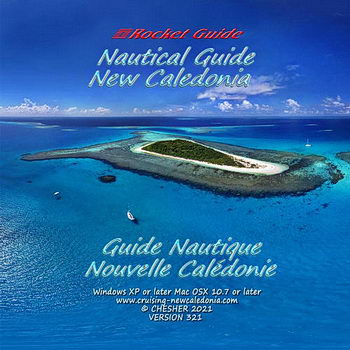 The comprehensive and accurate, easy to use, interactive Rocket Cruising Guide to New Caledonia. There are no other destinations in the world with cruising and tourism guides like the Rocket Guides to New Caledonia and Vanuatu. Plan your cruise in advance and have more fun when you arrive.